I thought we were done with the swallowtails after our last crop of dill all went to seed, but as it turns out I was wrong. Volunteer dill has sprouted up all over the yard, and with it comes a new batch of caterpillars.
Unfortunately, the caterpillars have also caught the attention of our local wasp population, who would love nothing more than to eat them alive. So we decided to bring some of them in.

You'd think, by now, their life cycle would seem more mundane. We've been raising them all summer long, and from one individual to the next the basic stages are almost identical: 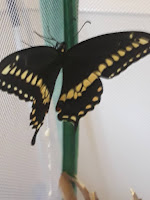 But despite this consistency, it never gets old. There's something intriguing about their single-mindedness. All they want is to grow, and they follow nature's command by consuming a staggering amount of food, the equivalent of you or me leveling a small forest by eating the trees down to stumps.
In the swallowtails' favor is the fact they're only eating our dill, which grows a lot faster than we could possibly eat it ourselves. Their ravenous cousins, the cabbage worms, receive far less friendly treatment when they're desolating our broccoli and kale. (And let's face facts: cabbage “worms” are caterpillars, too, but their diet has earned them a worse reputation.)
As for that fifth stage -- the restlessness -- it took us some time to get used to. With the first few caterpillars we raised we didn't know that was part of the cycle. Even after we found one creeping across our kitchen island, we figured it must have gotten confused and we kept trying to put it back on the dill.

Some of the runaways were more successful. One we later discovered in a cocoon hidden behind the kitchen trash. Another we found on the lam crawling across the floor, where it had somehow evaded the cat. And a third is still unaccounted for, although by this time I have to assume it met an unfortunate fate, since no swallowtail has ever appeared.

Once we finally understood this was a normal part of the process, we moved everyone into a protected enclosure. This doesn't stifle the wanderlust, but it does prevent them from getting lost in our kitchen. Instead they now walk loops around the enclosure, sometimes for hours, until they settle down to build a cocoon. Do they stop because they're exhausted? Or is there some secret signal that tells them this is the time, and here is the place? So far, I haven't figured it out.

What I do know is that their growth imperative is replaced by an urgent desire to travel as far as they possibly can. They're not just leaving behind their old feeding grounds, or finding a nice, quiet place to build a cocoon. They're traveling far, covering huge distances even at the risk of exposure. This may be the most vulnerable moment in the whole life cycle. Surely even the most bumbling predator would notice a plump, juicy caterpillar crawling around out in the open?

Yet somehow it all seems to work. Not just in our protected enclosure, but out there, in the wilds of the backyard with all its birds and wasps and neighborhood cats. I know it works because the caterpillars keep on coming, turning up in our dill as regular as clockwork. As much as I'd like to believe we've helped goose the numbers of our local swallowtail population, Nature's never really needed our help.

But we help anyway, and we watch, and we wonder: What would it be like to live with such purpose? And how does it feel to so effortlessly follow your nature?
at September 12, 2021