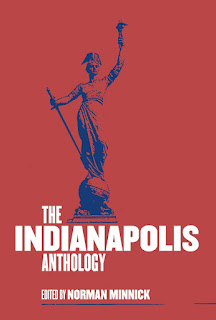 Last weekend I stopped by the book launch for The Indianapolis Anthology, part of an ongoing series from Belt Publishing. Specifically I went to see my friend Jackie Lutzke, who read from her micro-memoirs/flash nonfiction about life on the east side of the city.

Jackie's work is often focused on teasing meaning from small,ordinary moments. That strikes me as a Midwestern instinct, a corrective for the constant worry that everything exciting is happening some other place. Jackie's work is an argument that what actually matters are the things that show up in the quiet particulars of the place and the moment at hand.

The New Yorker published an interview this month with John Swartzwelder, a legendary (and legendarily reclusive) writer on The Simpsons. There's a lot to love, and I especially enjoyed it on the heels of reading Tim Waggoner and Charles Johnson reflecting on their own careers as writers. I really can't get enough of this stuff.

The whole thing is worth reading, but here's one of my favorite exchanges:

Do you remember the first funny thing you wrote?

I do, mostly because the reaction I got to it was so startling. I had just learned how to form letters into words, so I decided to write a play. The only thing I remember about the play itself, except for the last two lines, is that it was hilarious. But, when I read it aloud to my family, it got no laughs! Just supportive smiles and nods. I didn't get it.

But then I got to the second-to-last line, which was supposed to set up the big joke at the end. The setup line was: “This play has been brought to you by the Trash Can Airline Company,” which—since this was Boeing country—got a huge, possibly undeserved, laugh. Baffled, but feeling that I finally had my audience in the palm of my hand, I leaned back and practically screamed the big finish: “P.S. It stinks!!!” More supportive smiles and nods. Plainly, there was a trick to comedy, and I didn't know what it was.

Do you know what the trick is now?

I don't read a ton of philosophy, but I do have a soft spot for Kierkegaard. His jacket copy, however, sometimes makes him sound a maniac. One of the blurbs on Purity of Heart is to Will One Thing calls it "The equivalent of shock therapy.” The translator's introduction strikes a similar tone: “He is prepared to be hard, to wound in order to heal, to use the knife.”

This isn't wrong, exactly, but I never feel bruised by Kierkegaard. He never seems to be writing from anger, and I never have the sense that he's jabbing a finger at me in accusation. Most often he just seems excited. He reminds me of a friend I had as a kid who was super smart and always eager to share his latest discoveries, but who also had the self-awareness to realize that sometimes you have to help bring people along.

There are times reading Kierkegaard where you can feel him holding back just a little, like he knows he needs to pace himself. But his work is also full of warmth and a wry sense of humor that I find kind of endearing.

Anyway, all this to say that I've been going back to his work lately and re-reading Purity of Heart. As always, certain things will jump out. This week it was this:

Writers get caught in this trap a lot, I think (and probably so most people). When you write for an audience, of course you hope to win acclaim and avoid contempt. But the danger of making that your focus, or dividing your attention between the work at hand and an imagined audience, is that it's only the work that suffers for it. That's also the trap of success—if you do write something that wins some acclaim, do you move on and try something new? Or do you write the same story over again and hope that people don't notice?

More from Purity of Heart (this time without my blathering):

“In your occupation, what is your attitude of mind? And how do you carry out your occupation? Have you made up your own mind that your occupation is your real calling so that you do not have to make explanation hinge on the result, maintaining that it was not your real calling if the results are not favorable, if your efforts do not succeed? Alas, such fickleness weakens a man immeasurably. Therefore persevere. By God's help and by your own faithfulness something good will come from the unpromising beginning.”